Do you consistently find new rust spots on your favorite metal tools or objects? Rust can be annoying and unsightly, but you definitely can remove rust from metal to get the object back to new. It can be a relatively easy project depending on the level of rust that has accumulated and the tools you have on hand.

Read on for tips on how you can remove rust stains or new rust on various surfaces and which methods will work best.

Whether you need to remove rust from one object or multiple items, you can use the same methods. Before you decide which is right, consider a few options. Then, you'll know if one method is better for you than another.

Using chemicals to remove rust is a widely used option. The two most used and effective chemicals for DIY rust removal are citric acid and oxalic acid. Just make sure you have time for the chemicals to sit on the rust to remove it.

If you use citric acid, you will usually have a citric acid powder that needs to be mixed with some water. Choose a container that can fit the tools you need to clean and place the tools inside it. Cover the container and let it work its magic overnight. In the morning, you can rinse and dry the tools that should now be rust free.

Oxalic acid is great if you're in a bit of a hurry and don't want to wait overnight to remove rust. As with citric acid, make sure you can fit your tools in the container you use. Because oxalic acid is strong, you should wear gloves and goggles while you dilute the acid with water.

Let the objects sit in the acid for about 20 minutes. Finally, you can remove the item and wash it off, still using your protective equipment.

If you have a small amount of rust on a bigger item and can't soak it in acid, use a handheld wire brush. You can choose between multiple wire metals. A brass wire brush can clean rust off almost any type of metal. 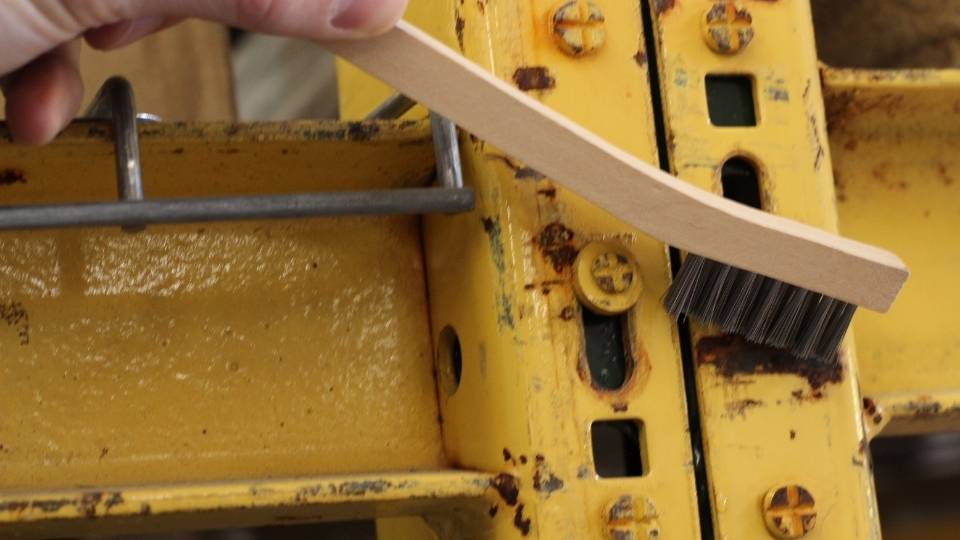 No matter which brush you select, you can use it to get the rust off your tools or a small area of rust on a larger item. Using a wire brush will take some work, so it's not quite as easy as putting the tools in a mix of water and chemicals, but is just as effective, possibly more.

When removing rust from metal, you may want to try an at-home solution for the sake of convenience and to save some money. These can be useful if you need to remove rust stains from metal and the stains are small and minor. You don't have to worry about using harsh chemicals, and some of these options don't involve much work.

If you don't have time to get rust removal tools, you can take advantage of what you already have at home. Then, you can remove rust the same day you notice it. Here are a few DIY methods to consider.

The first option to try uses vinegar, baking soda, and salt, all of which you might already have in your kitchen cabinets. You can use the mixture to clean tools and other small items as you do other tasks.

This method is great to try overnight if you have time to let the objects soak for the full 12 hours. That way, you can easily get rid of the rust the following morning.

Another method that uses baking soda also requires tartar and hydrogen peroxide. Specifically, you'll need cream of tartar, which you will mix with an equal amount of baking soda.

Slowly add a bit of hydrogen peroxide to the mixture so that the consistency becomes paste-like. Rub the paste on the metal, covering all of the rust, and leave it on for about an hour. Then, you can simply wash off the paste and reveal a clean surface.

This is a great option for small areas of rusting on larger items since you don't need to find a container that can fit the object.

You can also use ketchup with washing soda to create another great DIY rust remover. However, you won't mix these two ingredients. Instead, you'll use the washing soda in a spray bottle with some water, then follow up with the Heinz.

Use the spray bottle on the area with the rust or rust stain. Add some ketchup on top, and let it sit for a couple of hours. When the time is up, you can rinse the object with water and dry it off.

This is a great method for both smaller tools and areas of rust on larger surfaces. While it does take some work, you can put the mixture and ketchup on early in the day or in the evening. Then, you can clean it off without having to wait all day or night.

If you need to remove rust from metal with a smooth surface, grab a raw potato. You'll need to cut the potato in half to expose the inside, which naturally contains the same oxalic acid mentioned in the chemical rust removal section above. This is a great option if you want to use the acid to remove rust but don't have protective gear.

When removing rust from a knife, you can just stick the knife in the potato. Let it sit for a few hours so that the oxalic acid can get rid of the rust. Then, wash it off as normal.

Squeeze juice from the lemon/lime on top of the salt. Keep the lemon and lime rinds on hand while you leave the mixture on the rust for a few hours. Later, you can use the rind to clean off the residue, and you should see the rust go away.

Rinse the metal object in water and dry it with a cloth. Then, you can use the tool or object as you usually would. 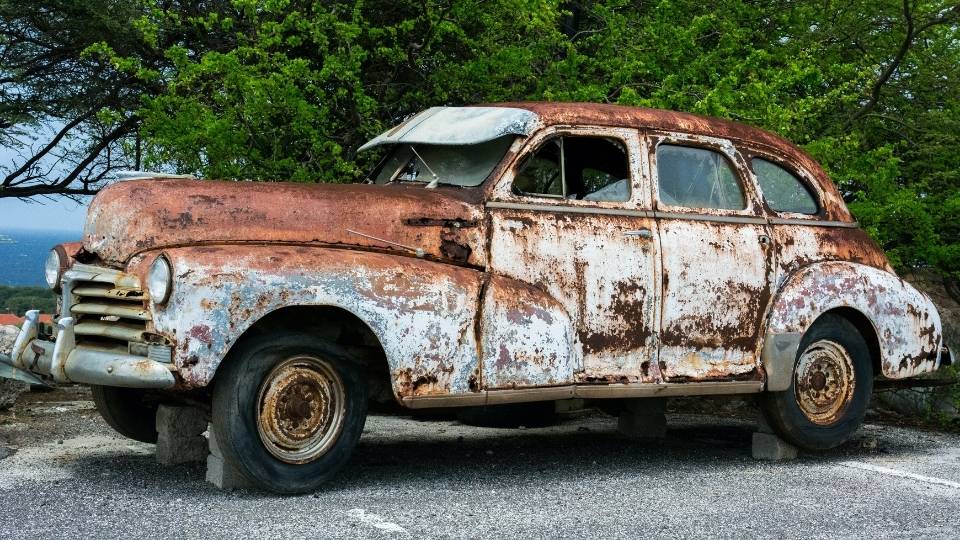 If you have a large metal object with a lot of rust, you can try some of the previous methods. However, it can take a lot of time and effort to remove all of the rust completely that way. You can use a few different rust removal tools to help clear a large amount of rust.

This can be quicker than using chemicals or the DIY options. And it can work well for a variety of metals and rust issues. Here are a few things you can try to get rid of rust on large objects.

Strip discs are designed to help you clean and strip paint, scale, and/or rust off of the surface of metal. They are abrasive enough to strip away rust without damaging the metal underneath. You'll usually use the disc with an angle grinder to grind rust off metal. These discs are fantastic and can be an alternative to harsher wire abrasives.

They can get rid of scaling and oxidation, which is how rust forms. That way, you can keep your metal surface looking good, and you can extend its lifespan. 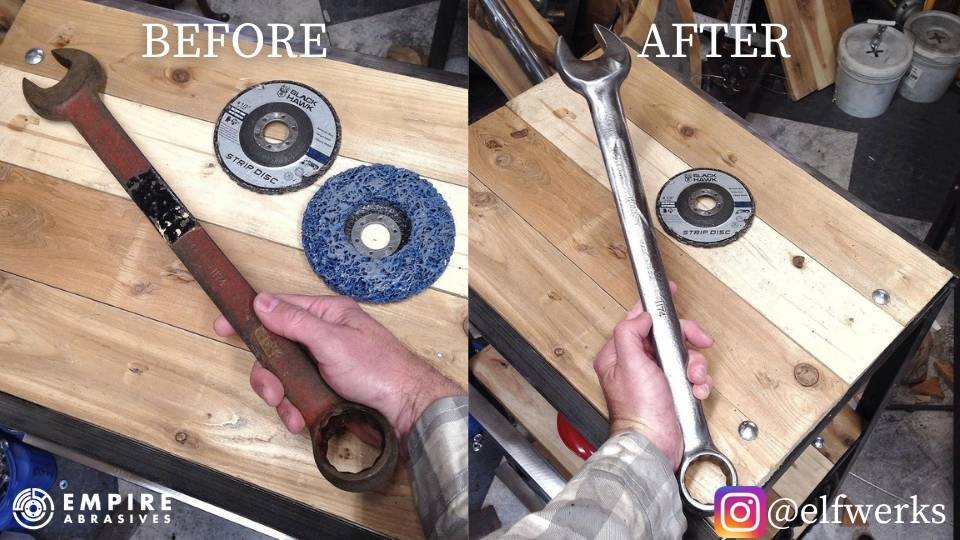 Some strip discs are small enough to work in different spots. So if you have a large metal object but have rust in cracks and crevices, a smaller Roloc strip disc is great. You can use it in the same way as a larger disc, but it can be more flexible.

Wire wheels work like handheld wire brushes, but they can rotate like a wheel, which exerts more friction for faster rust removal. You'll attach a larger wheel to an angle grinder or bench grinder and smaller ones to power drills or die grinders.

Wire cup brushes and end brushes are similar, but are more useful for removing rust when pressed straight into the metal, rather than working from a side angle like a traditional wire wheel.

Wire wheels, cup brushes, and end brushes come in crimped, knotted, and stringer styles - all useful at removing rust from metal. Crimped wires are the best option for removing rust. Wheels, cup brushes, and end brushes also come in different sizes, so you can decide which is best for you based on the amount of rust you need to remove and the power tools you have on hand.

Another variation is the metal wire, which comes in carbon steel or stainless steel for wire wheels. End and cup brushes are available with those options, but we also carry brass coated cup brushes and tempered steel not end brushes.

The key to using these wire abrasives best is to make sure you only use the ends of the wires for the work. While they can be flexible, you'll get the best results from the sharp tips without pressing the wires into the metal with much force.

If you like the idea of the strip and clean discs but have a larger area to work on, you can also use strip and clean abrasive drums. These are a popular option for auto body workers and classic car restorers that need to remove rust from a car when a lot of the surface is rusted over.

Abrasive drums work well on brushing tools, finishing tools, and contour grinders. You can also use the drums on a linear grinder or a surface conditioning tool. They are a 4.5” drum sander, which have a bigger surface area to clean that the other options. That way, you can remove rust from a bigger area more quickly.

The coarse grains in the webbing help get the rust off of surfaces. And if you have to remove paint or other coatings from a metal surface, you can use the same tool. That way, you don't need to have tons of tools on hand for cleaning metals.

The strip and clean drums quickly remove rust, scale, and paint while leaving the metal underneath intact and undamaged.

How Will You Remove Rust From Metal?

Now you know multiple ways to remove rust from metal so you can get rid of it quickly and easily. No matter how or where the rust appears, some method or combination of methods described above can help.

While chemicals and rust removal tools can work fast and effectively, DIY methods are great. You probably have everything you need, so you don't need to wait to start removing the rust. If the method doesn't get rid of all of the rust, you can follow it up with something stronger, like the tools or chemicals mentioned above.

We are always here to help you determine the best tool for the job. Our abrasives experts are available by phone or chat to discuss your option with you.