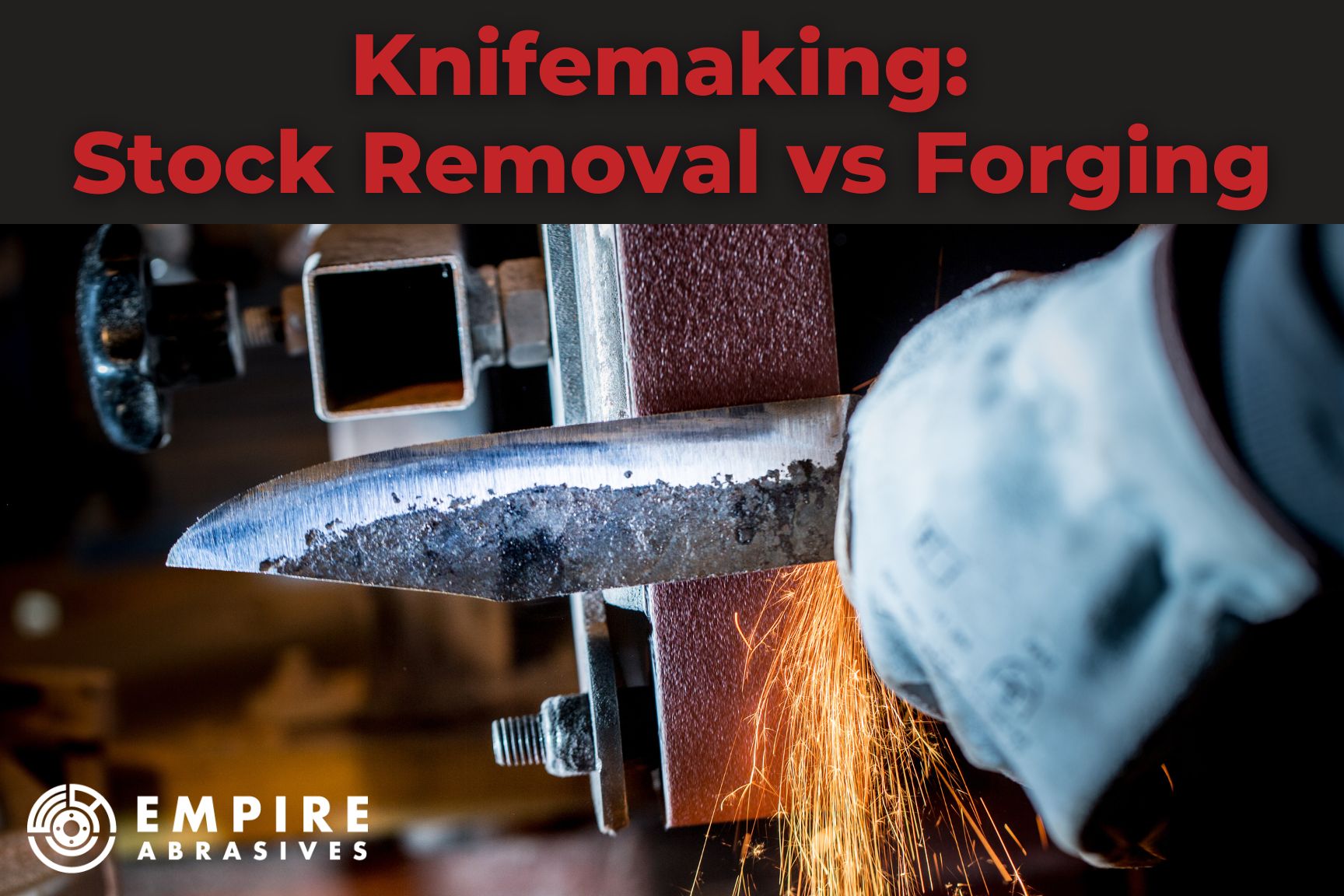 Most communities have at least one contentious topic or discussion that divides them, and for the knifemaking community, it’s the process of stock removal vs forging. Both approaches have their pros and cons, but which is better? Here’s what knifemaking enthusiasts should know about what stock removal and forging are, how they differ, and which may be better for you.

Stock Removal vs. Forging: What Are They?

Before we discuss which technique is better for stock removal vs forging, we’ll need to cover what exactly these processes are and how knifemakers do them.

For centuries, forging was the primary method for knifemaking, which involves heating your blade in a forge until it’s hot enough to shape with a hammer and anvil. Historically, blacksmiths used charcoal or coal forges to heat their blades. Today, modern technology means that blacksmiths can use gas-powered forges, making it a lot easier to control the temperature.

When knifemaking is portrayed in historical movies and TV shows, forging is usually what you see – a single blacksmith hammering away at hot metal until it’s the desired shape. Of course, the reality of forging is a little more complicated, especially with advances in modern technology.

The first step in the forging process is heating the metal until it turns a bright yellow-orange, which is usually around 1,800 to 2,100℉. This initial part of the process can take around five to ten minutes for the metal to heat to the desired temperature, and then the blacksmith will use a tool like tongs to remove it.

Shaping and Flattening the Blade

This can take a little more time, especially since you’ll need both sides of the blade to be even. This is one of the most important parts of the forging process because you’re creating the major shape of the knife.

Heat and Re-cool the Blade

Unfortunately, you’re not done heating up the blade. Now that you’ve got shaped, the knife has to go back into the forge until it’s red-hot, which is usually close to 1,500℉. After it’s reached the desired temperature, you can take the knife out with tongs and let it cool until it’s only around 400℉.

Once it’s cooled, the knife goes back in the forge again – and another three more times. While this may seem redundant, it helps harden the steel and gives you a more effective knife as the end result.

After heating the knife three times, you’ll want to use a sander to smooth the edges of your knife.

Quenching and Re-Heating the Blade

Quenching is similar to re-heating your blade, but you’ll be dipping the blade into the oil until it’s close to room temperature. It’s important to make sure you keep the blade moving even while it’s in the oil.

This is a delicate part of the forging process – without it, your knife won’t be able to maintain its hard edge or deal with regular usage. After quenching, you’ll need to heat the blade one more time on a lower heat to get rid of any excess stress that quenching might’ve caused.

Nobody likes a dull knife, and the final step in forging a knife is adding a handle but also sharpening the edge with a fine file and whetstone.

What Is Stock Removal?

While forging may have been the primary knifemaking technique throughout history, stock removal has recently gained popularity in the knifemaking community, especially for beginners.

Forging relies on shaping your blade with high temperatures, but stock removal is a lot similar to carving or sculpting out your blade – rather than shaping the knife, you’ll rely more heavily on tools for knifemaking, such as belt sanders (most knifemakers will use 2 x 72-inch sanding belts, 1 x 30-inch sanding belts or 2 x 42-inch sanding belts), saws, and other abrasives to remove excess material until you’ve got the desired shape.

With stock removal, you’ll first need to draw the silhouette of your knife on a piece of paper, cut it out, and use a dark marker to trace the outline on a metal sheet. This technique will help you get the knife to look a specific way you have in mind, but some experienced knifemakers will skip this step and make a freestyle shape.

Creating the Shape of Your Knife

Using the marker outline, you can create the basic shape of your knife with an angle grinder and cut-off wheel. This cuts out your blade shape, and you can use a grinding wheel to smooth out any rough edges that your initial cut may have. For this step, it’s normal to see still parts of that original marker outline even after you’ve used the angle grinder – but you can grind down those edges even more with a belt sander.

With a belt sander, you’ll grind towards the spine of your knife – and you can use either a chisel bevel or a V bevel for this step. Both bevels create the same effect, although V bevels tend to be more common and work by shaping both sides of the blade.

Treat Your Knife With Heat

Similar to forging, stock removal also requires heating your blade with a forge or kiln and then quenching it in oil until you’ve hardened the steel.

Re-Heat and Temper the Blade

While you can use a forge for the step above, you only need an oven for this one. You’ll only have to re-heat your blade to 400℉, but then it needs a few hours to cool down until it’s room temperature. If you don’t have a forge to temper your blade, you can actually use your kitchen oven or even your toaster oven.

Bevel and Sharpen Your Blade

Once your blade has cooled down, you can use your knife grinding belt for a second bevel, and then you can polish and sharpen your blade for the last time with a fine grit.

Which Technique Is Better?

While you may see plenty of knifemakers discuss which technique is better, there’s no “right” answer. Forging is the primary method that blacksmiths used throughout history, and many people see it as a true art form. Forging tends to be faster if you’re trying to create intricate designs in your knife.

And, since you’re shaping your metal rather than cutting out the shape, forging a knife won’t waste quite as much metal. It usually produces less dust than stock removal, and if you’ve got your own forge, you can even do it outside.

In some cases, the process of forging can also mean creating harder, more resistant blades that won’t fracture as easily.

However, for beginners that are still learning the art of knifemaking, stock removal is usually easier to master and more efficient. It’s not always quicker for more ornate designs, but if you’ve got a simple design and the right knife making tools, stock removal is just as effective as forging.

Not only is there less equipment (and expenses) involved, but stock removal is more versatile with different steel types than forging is.

Ultimately, when it comes to figuring out whether you should use stock removal or forging, the right answer depends on what you’re trying to accomplish. For more experienced bladesmiths that are trying to create something really intricate, forging knives might be the best choice.

But, if you’re a beginner and/or if you just want to create a knife that’s more cost-effective and won’t take as long for you to make, creating blades with stock removal may be the way to go.