If you've ever mixed the terms buffing and polishing, you're not alone. While both offer the end result of a smooth surface, their final appearance and the techniques used to get there differ. Cars, floors, and metal are just a few examples of the kinds of surfaces you can buff and polish.

Whether you want to learn about buffing vs. polishing because you're unsure which is the right fit for your situation, or you're simply curious about the differences, we'll share details that will have you sounding like a buffing and polishing expert in no time.

Buffing is the act of smoothing out a surface and giving it a shiny appearance. It does so by evening out nicks and scratches on painted or raw wood, aluminum, copper, glass, among most other surface materials.

To buff an object quickly and evenly, you'll usually want to use a buffing wheel. Buffing wheels contain an abrasive disc that helps even out the material you're buffing. Because of the wide range of materials that you can buff, you'll need to make sure that you choose the right type of buffing wheel.

Common types of buffing wheels include:

For example, if you're buffing plastic, you'd want to use an orange or white airway or loose sewn buffer as the other three coarser options could destroy the plastic's surface. On the other hand, stainless steel and iron often need sisal buffing wheels to maximize their effectiveness.

That said, you can use different buffing wheels on the same material. Using the stainless steel example above, you could begin by buffing with a sisal buffing wheel and then move down the above bullet list all the way to a loose sewn wheel, depending on how the metal responds.

Pro Tip - If the compound stars to clump in one spot, or if you accidentally add too much compound, a buffing wheel rake can quickly help you remove some of the excess buffing compound.

Within the process of buffing a surface, there are two steps you'll need to complete in order to get your material looking its best—cut buffing and color buffing.

Cut buffing is the first stage, as it uses coarser materials to eliminate polishing lines (we'll cover this in more detail shortly). It's a more time-consuming process than color buffing, and you'll need to apply extra pressure to get the desired results.

On the other hand, color buffing produces the final aesthetic look you worked for. It uses fine buffing techniques to erase any remaining small lines that cut buffing left behind. Color buffing is a quicker type of buffing than cut buffing. It also leaves behind a more brilliant, lustrous surface.

Cut buffing and color buffing both use buffing compounds, but it's important to choose a suitable compound based on the buffing stage.

For example, the buffing compounds that work best for cut buffing include:

Once you move on to the color buffing stage, you should consider buffing compounds such as:

You don't have to worry about the color of the buffing compound changing the color of the material you're buffing—the colors are simply a way to know whether you're working with a more abrasive or finer grit.

Given what you now know, you've probably already guessed that the black emery and brown buffing compounds in cut buffing are more abrasive than the examples we gave for color buffing.

Polishing is a coarser version of buffing. The purpose of polishing is to level out uneven surfaces that happen to materials over time or after sanding/grinding a surface. In turn, this leaves behind a smoother-looking finish.

You can polish various materials such as:

To polish an item, you'll need to select a polishing wheel. You can choose from various options but felt polishing wheels are a popular choice because you can use them on flat and curved surfaces.

Another item to consider when polishing is that the material you're polishing can overheat. For this reason, some people prefer to use flap discs instead of the standard polishing wheel. Due to the carefully laid out flaps across the disc, more air can reach the material, and it can save you time by not having to pause your work while you let everything cool down.

You'll also need to use a polishing solution with these wheels, which are different than buffing compounds mentioned above.

As you've hopefully gathered by now, buffing and polishing are not the same. However, you can apply both to the same material—you can use polishing techniques first, followed by buffing.

Below are some of the most significant differences when comparing buffing vs. polishing:

Since polishing involves removing scratches and other blemishes on the surface of a material, it's a more time-consuming process than buffing. Nevertheless, within the buffing stages, cut buffing takes up more time and is more laborious than color buffing, relatively speaking.

Finally, one of the biggest differences between buffing and polishing is the shine they offer. It's a common misconception for people to assume that polishing offers more brilliance than buffing, but it's actually the other way around.

Some people prefer the rustic look that polishing gives material since it leaves behind lines and a brushed appearance. However, more often than not, people choose to buff material after polishing it.

That said, if a material isn't in bad shape and just needs some touch-ups, you can opt to skip polishing and move straight to buffing it. For example, some people choose to do floor buffing using maintenance buffer pads. 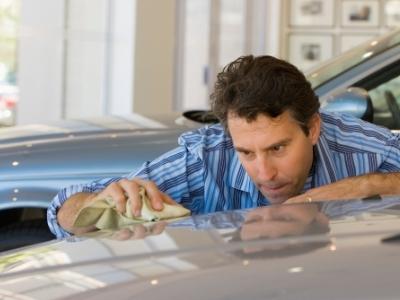 Waxing is the process of coating paint with a special material to increase its lifespan. Most people think of cars when they hear the word waxing, and for a good reason—it prevents rust, which is especially important for people living in snowy climates or near saltwater.

If you assume that waxing is what makes something shiny, you're not alone. However, it's actually polishing that helps give a surface its shine. The reasons that polishing makes a surface more brilliant than waxing include:

You might be wondering—is it better to start off by polishing or waxing a surface? You should always polish first and finish the job off with waxing.

Not only will waxing and polishing a surface enhance its appearance, but it'll also make the material more durable so that you can use it for a longer amount of time.

Buffing vs. Rubbing vs. Polishing Compound

By now, you understand that both buffing and polishing involve applying a compound or solution to help bring out the brilliance in a material. However, you can also use a rubbing compound.

Rubbing compounds are more abrasive than both the polish and buffing varieties. It's important to use them sparingly, as they remove a larger amount of paint in order to smooth out the appearance of a surface.

The most common use for rubbing compounds is when a material's surface has deeper scratches or other significant imperfections. On the other hand, polishing compounds are ideal for more minor scratches and blemishes.

Buffing compounds are the least abrasive of these three. People most commonly use them to remove the superficial streaks that polishing leaves behind, which creates that sought-after glossy shine.